Some might say, "there's no such thing as bad PR". Fortunately, this approach is becoming outdated as brands understand the impact of PR scandals on their market position. We've gathered three recent company scandals and discuss how they overcame these situations with varying degrees of success. You will learn what to do and what not to do when your reputation is in danger.

Blizzard scandal ruining its reputation on the market

Activision Blizzard, a well-known game developer and publisher, has gotten into many problems after the media accused the business of covering up sexual harassment and defending abusers instead of victims. The lawsuit, which was front-page news for a while, shook the gaming industry and sparked a movement to protect women's rights and change the market situation.

What was the scandal about?

The information leaked to media, depicting a terrible picture of female employees' lives at Blizzard, including widespread sexual harassment, gender discrimination, retribution, and a "frat boy" workplace culture in which men objectified women's bodies and openly talked about rape.

Before the accident, the number of brand mentions was consistent, with most discussions centered on the games that fans expected from the company. However, on July 22nd, the situation shifted when the media spread the horrible news, resulting in a sudden spike in mentions.

YouScan can not only detect the spike, but also interpret the meaning of the mentions and assign a trend name and its sentiment.

What's remarkable is that, prior to the controversy, Activision had a relatively high degree of negative perception. However, it was primarily dedicated to games that the publisher had been developing for a long time, making fans wait for much too long. For example, Blizzard failed to release Overwatch 2 and Diablo 4 in 2021, as promised, and instead pushed the launch date to 2022, which is still not the final date. 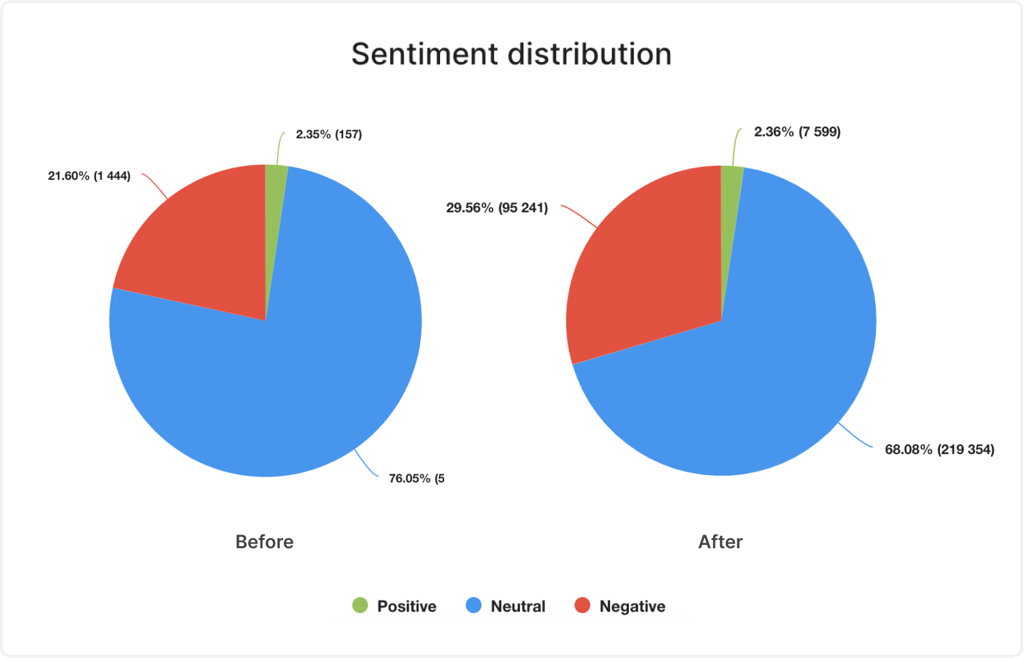 If we look at the most frequently used words prior to the scandal, we can see that the majority of them are describing more general words and phrases relevant to the industry, as well as mentioning games like World of Warcraft and Overwatch. 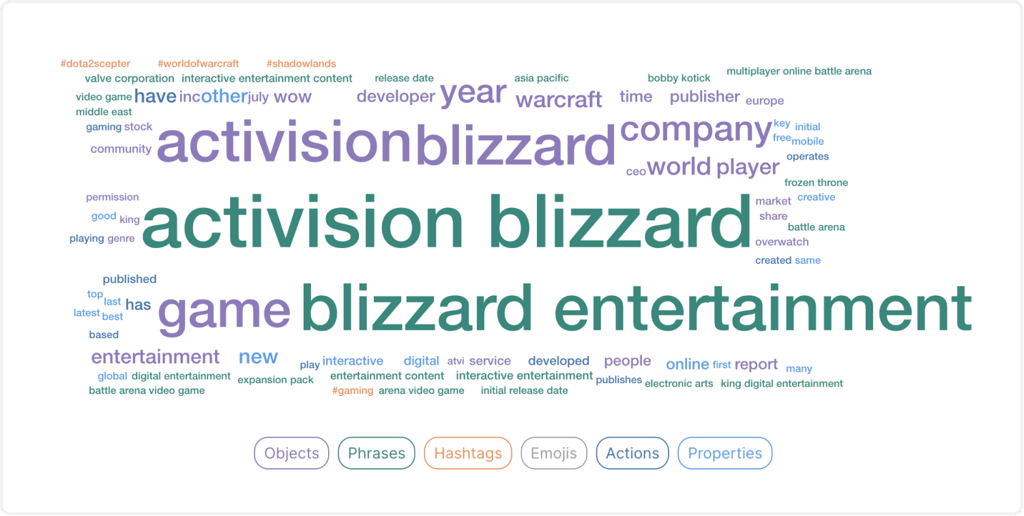 Meanwhile, beginning on July 22nd, the focus of conversation changed to everything related to the lawsuit, harassment, and the company's inadequate response. 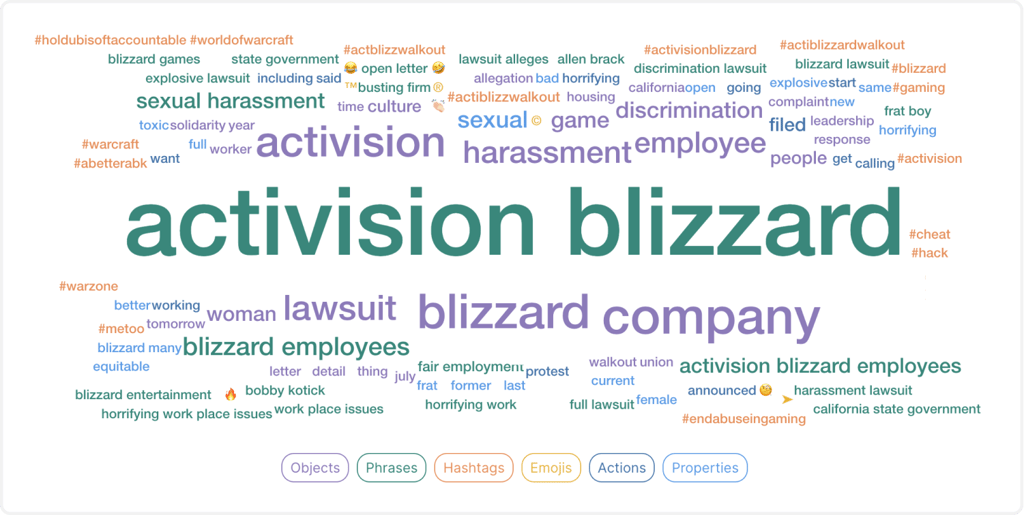 Aside from the lawsuit, the company has faced challenges such as employees protesting for better working conditions, large brands withdrawing support for Overwatch, hundreds of employees stopping work on major projects, gaming websites, YouTube channels, and streamers halting coverage of the holding's games, and, of course, company's share price declines.

Moreover, the official response to this situation was a total disaster, as the brand didn't provide any further steps they are planning to take to enhance the conditions for women. Instead, the excuse sounded as if the company's CEO was unwilling to change anything, which elicited even more negative feedback from the audience.

Before speaking out, the company should have investigated which aspects of the problem offend people the most and focused on ways to change these points and add more empathy to the speech. Social media monitoring is an excellent tool for listening to what people are saying about your brand on social media and adjusting your strategy based on this information. In the case of Blizzard, using more human language during excuses could have assisted them in reducing the intensity of emotions at least slightly.

It is difficult to predict how the game holding will overcome this crisis at the moment, but this situation has certainly drawn attention to the industry's problems.

Let's move to scandals connected to advertising because even large corporations make mistakes.

We've all seen Snickers commercials in which a character appears to be out of place or situation, but after eating a chocolate bar, this person transforms into the "right one." Finally, the packshot appears, with the caption "You are not you when you are hungry."

Everyone enjoys these commercials because they frequently feature celebrities or depict funny situations. On the other hand, Snickers Spain chose the incorrect transformation, which turned out to be homophobic.

What's wrong with the Snickers ad?

After eating a Snickers ice cream, Spanish influencer Aless Gibaja transforms into a bearded man with a low voice in the 20-second video. Alesses' character is portrayed as the incorrect version of a "real man," insulting gay men.

The video was misunderstood by the audience, prompting a boycott of the brand. People commented that Snickers should have thought twice before filming such an intolerant commercial.

What was the brand's reaction?

After receiving a barrage of negative feedback, including from Spain's equality minister, the brand apologized for "miscommunication" and removed the video.

Following one of the automobile industry's worst scandals, connected to emissions, Volkswagen was expected to act very carefully to restore its reputation. However, the firm was embroiled in a new scandal after introducing a new Golf advertisement.

To promote the new Golf, the brand created a series of short videos. One of the videos showed a large white hand holding a man with dark skin and moving him around the street like a marionette. Finally, the hand flipped this man into the entrance of Buenos Aires' Petit Colon cafe, evoking images of colonialism. 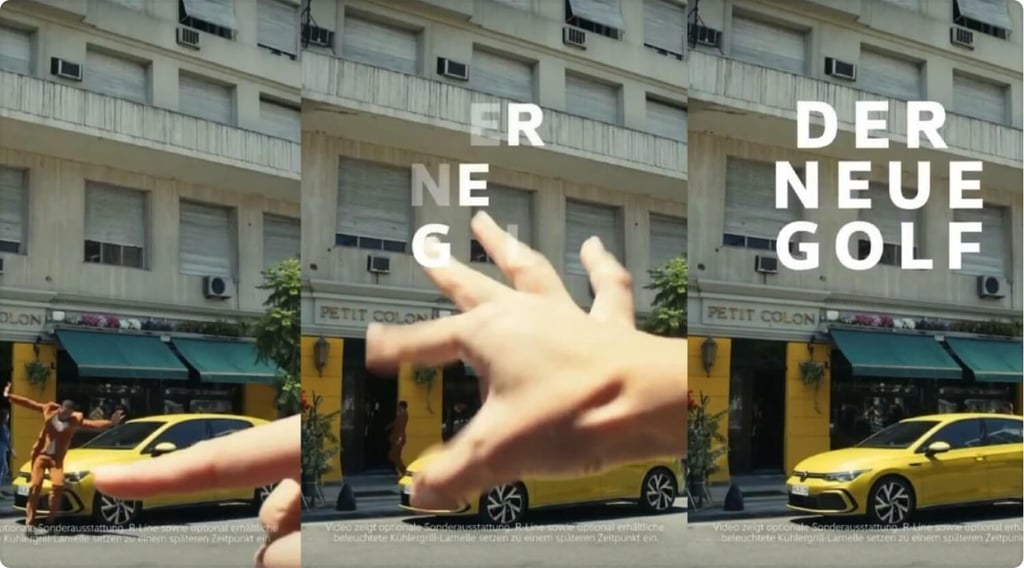 Aside from the weird image itself, the audience noted that as the German tagline "Der Neue Golf" (which means "The New Golf") fades in, the letters that disappear first spell out a word in German, "neger," which can be used as the German equivalent of the n-word.

What was the brand's reaction?

VW quickly realized that the commercial was a colossal failure and issued an apology, stating that the company does not tolerate any type of racism, xenophobia, or prejudice. The video was also removed from the brand's social media accounts and elsewhere. 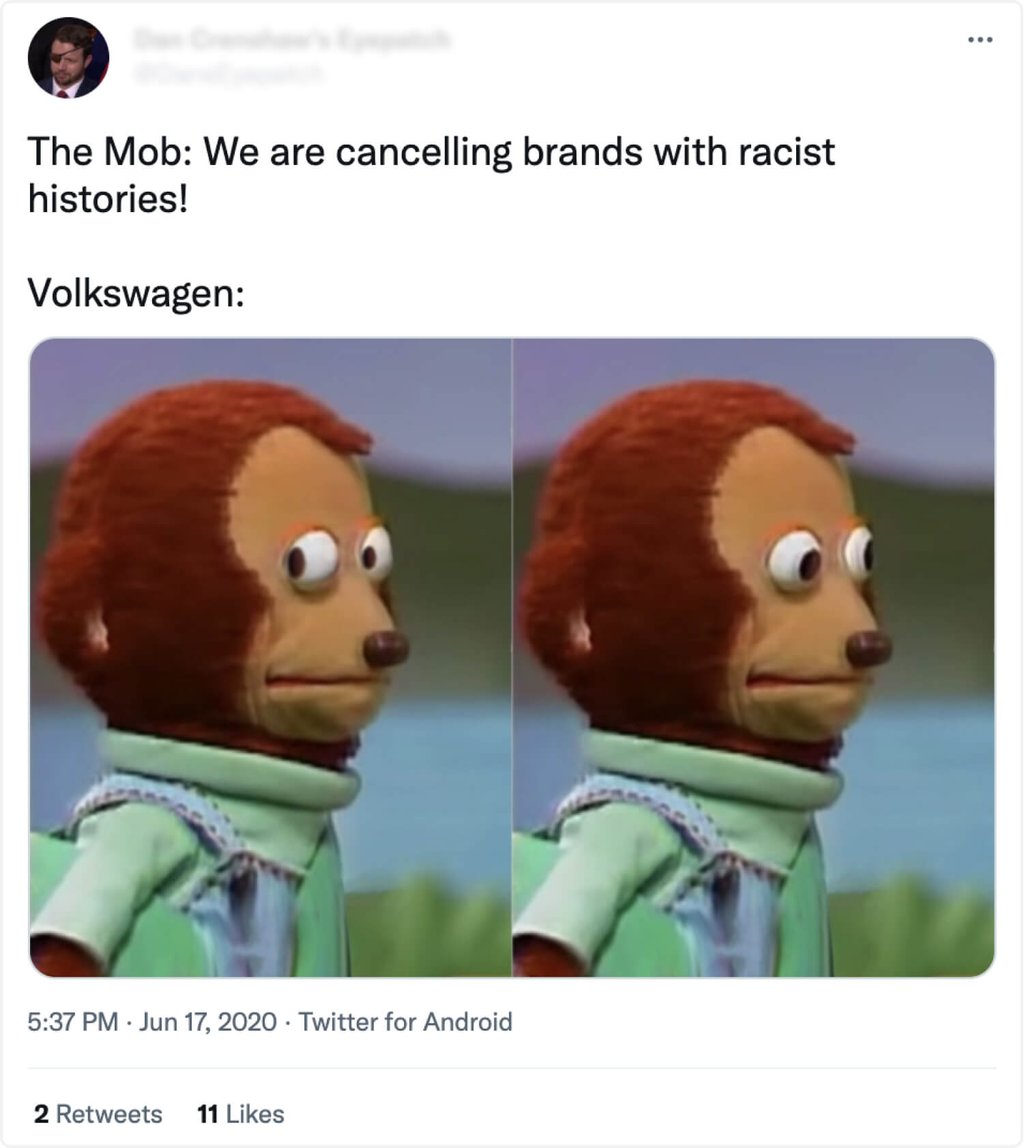 What happened? During a press conference, Portugal striker Cristiano Ronaldo pushed the Coca-Cola bottles out of the frame so they wouldn't be in the frame with him. Isn't it a trifle? Perhaps, but the incident occurred in front of a dozen international media outlets at Euro 2020. 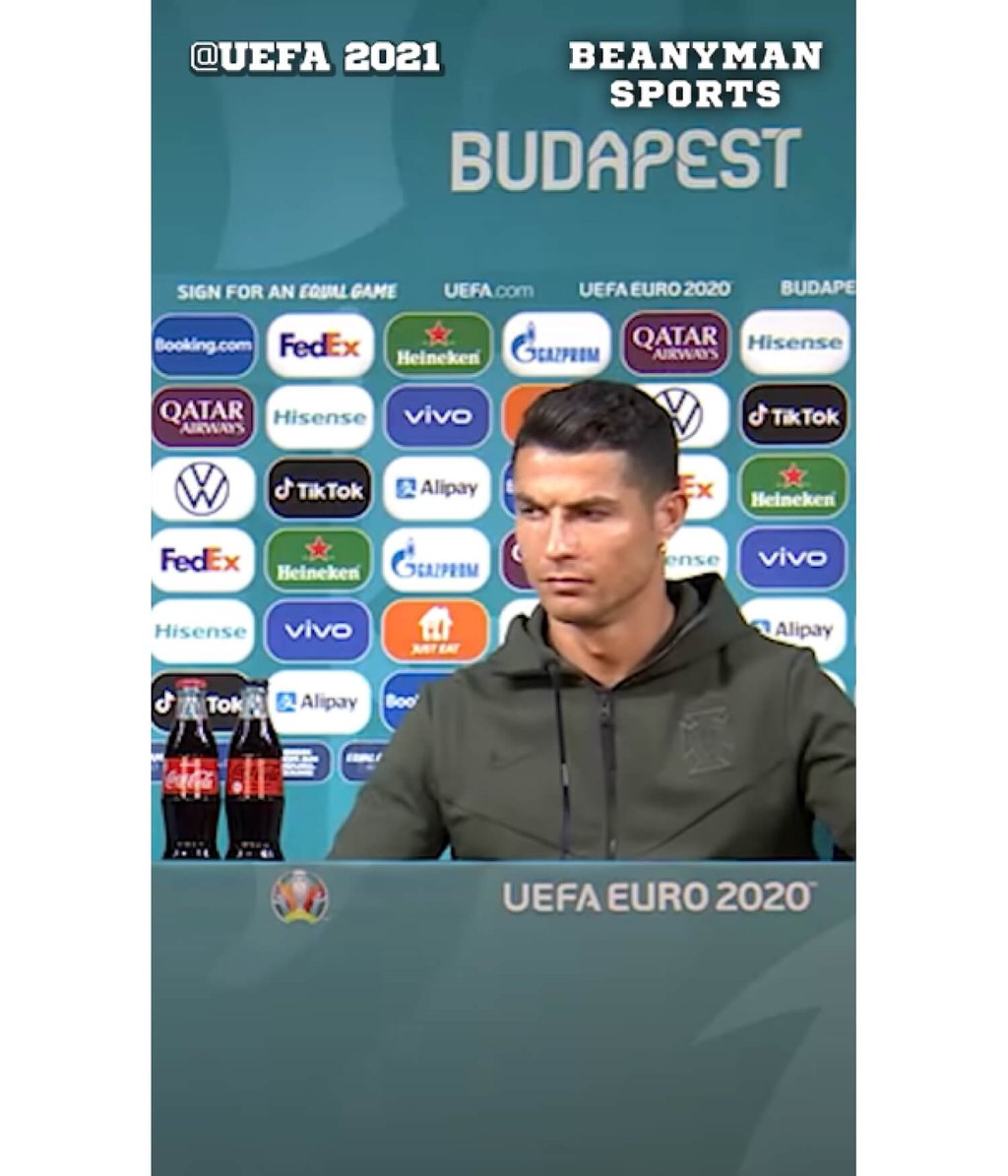 Analysts recorded a 1.6 percent decrease in the value of Coca-Cola shares half an hour later, and the company lost $4 billion in value. Misinformation quickly spread through the media, claiming that the football player was to blame for everything.

Even the football player's connection to fluctuations in Coca-Cola stock was quickly denied. Sports fans instantly remembered that Cristiano does not drink soda, limits his sugar intake, and has never advertised Coca-Cola or Pepsi.

The flash mob also did not work. Paul Pogba, a French footballer, attempted to imitate Cristiano by removing a bottle of Heineken, but that was it. 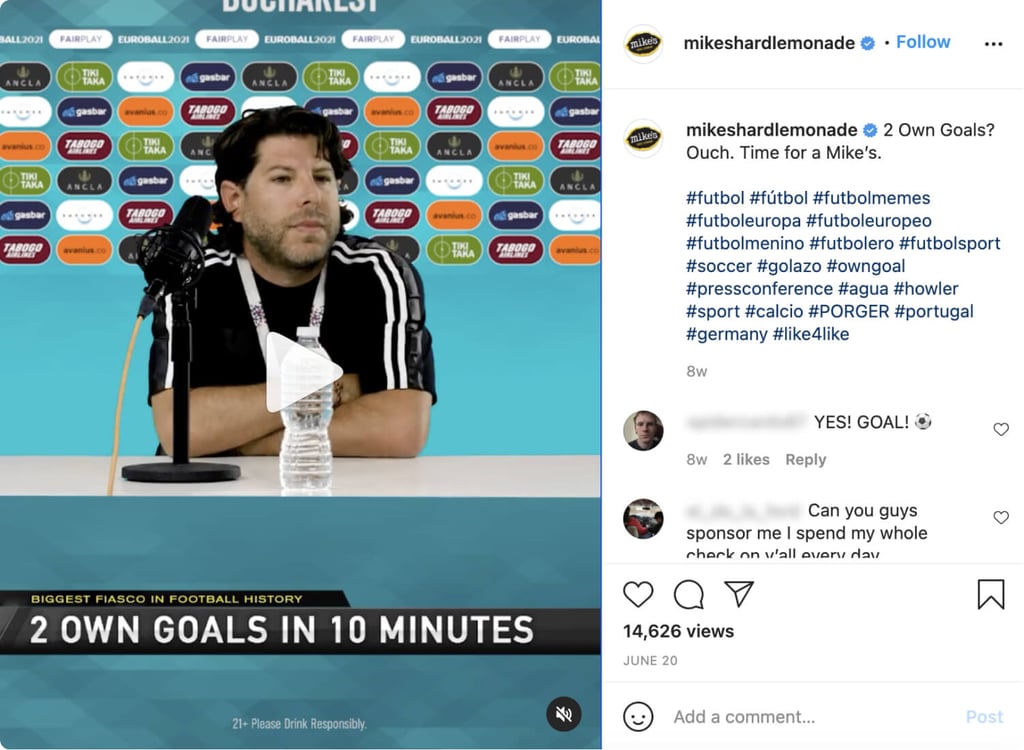 In addition, Mike's, a direct competitor of Coca-Cola, released a parody in which a football player removes water, leaving them with lemonade. Obviously, such actions do not require crisis reputation management.

Cristiano was mostly remembered in news feeds on social media. Users were also reminded that excessive soda consumption is harmful.

Brand's reaction
Coca-Cola acted professionally and calmly, noting that players have every right to choose their beverage. In addition, UEFA has requested that players from teams competing in Euro 2020 refrain from removing sponsored drinks from tables at press conferences.

YouScan enables you to be confident in reputation management by sending notifications to Slack or email when a trend requires immediate attention.

One of the most critical tools for brands is a social media monitoring system. It allows you to quickly diagnose a reputation issue (and make sure that it really is).

PR disaster: what should you remember about it?

1. Remaining silent in the face of a reputation crisis is not an option.

2. Reputation is what people are saying about the brand. As a result, it is critical to keep track of any mentions on the internet.

3. A crisis plan will assist you in acting consistently and with the least amount of reputational harm.

4. Either the brand declares and adheres to values, or it remains silent.

5. Before taking action, ensure that the company is truly facing a reputational crisis.

Reputation crises are easier to overcome when you have a trustworthy assistant. Try YouScan's demo for free to monitor your reputation online.

How to get insights from product feedback on social media

What is user-generated content and how brands can use it